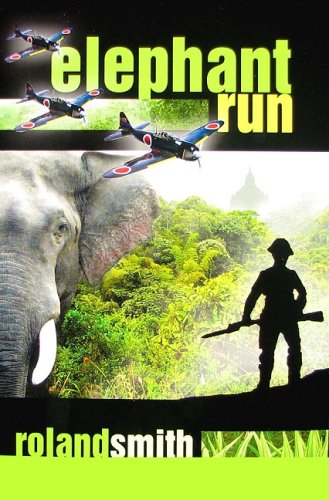 In 1941, bombs drop from the night skies of London, demolishing the apartment Nick Freestone lives in with his mother. Deciding the situation in England is too unstable, Nick's mother sends him to live with his father in Burma, hoping he will be safer living on the family's teak plantation. But as soon as Nick arrives, trouble erupts in the remote Burmese elephant village. Japanese soldiers invade, and Nick's father is taken prisoner. Nick is left stranded on the plantation, forced to work as a servant to the new rulers. As life in the village grows more dangerous for Nick and his young friend, Mya, they plan their daring escape. Setting off on elephant back, they will risk their lives to save Nick's father and Mya's brother from a Japanese POW camp. In this thrilling journey through the jungles of Burma, Roland Smith explores the far-reaching effects of World War II, while introducing readers to the fascinating world of wild timber elephants and their mahouts. 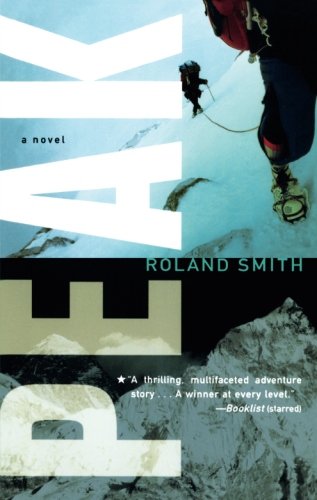 The only thing you’ll find on the summit of Mount Everest is a divine view. The things that really matter lie far below. – Peak MarcelloAfter fourteen-year-old Peak Marcello is arrested for scaling a New York City skyscraper, he's left with two choices: wither away in Juvenile Detention or go live with his long-lost father, who runs a climbing company in Thailand. But Peak quickly learns that his father's renewed interest in him has strings attached. Big strings. As owner of Peak Expeditions, he wants his son to be the youngest person to reach the Everest summit--and his motives are selfish at best. Even so, for a climbing addict like Peak, tackling Everest is the challenge of a lifetime. But it's also one that could cost him his life. Roland Smith has created an action-packed adventure about friendship, sacrifice, family, and the drive to take on Everest, despite the incredible risk. The story of Peak’s dangerous ascent—told in his own words—is suspenseful, immediate, and impossible to put down. 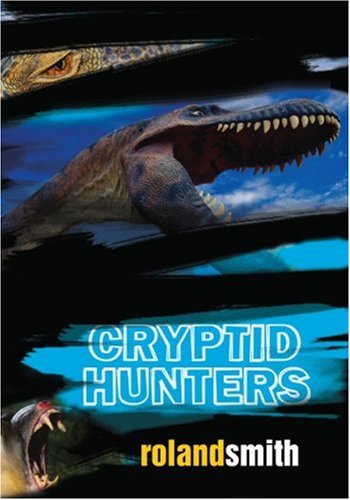 After their parents are lost in an accident, thirteen-year old twins Grace and Marty are whisked away to live with their Uncle Wolfe-an uncle that they didn't even know they had! The intimidating Uncle Wolfe is an anthropologist who has dedicated his life to finding cryptids, mysterious creatures believed to be long extinct. 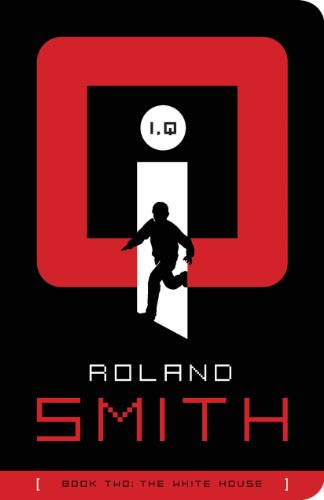 In Book One: Independence Hall, we met Q and his stepsister, Angela. We met their rocker parents, Blaze and Roger; we met the Secret Service team protecting the family; and we met the main players of the Mossad team that is following them. Book Two takes us on another thrilling caper, this time to the White House where Q and Angela continue their quest to uncover the truth behind the supposed death of Angela's real mother--a former Secret Service agent--while trying to differentiate the "good guys" from the "bad guys." 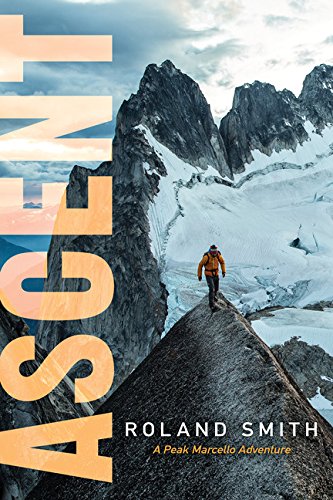 Peak Marcello goes to Mayanmar to climb one of the most isolated mountains in the world in this thrilling new novel from bestselling author Roland Smith. After conquering the mountains in Afghanistan, Peak Marcello goes to Myanmar, a country that has been in the grips of a brutal military regime for more than fifty years, to visit Alessia. When he’s invited to climb Hkakabo Razi, one of the most isolated mountains in the world, Peak can’t pass up the opportunity. But getting to the mountain will involve a four-week trek through tropical rainforests rife with hazards—from venomous reptiles and leeches to corrupt police and military. In the end, summiting Hkakabo Razi may be the easiest thing Peak does. 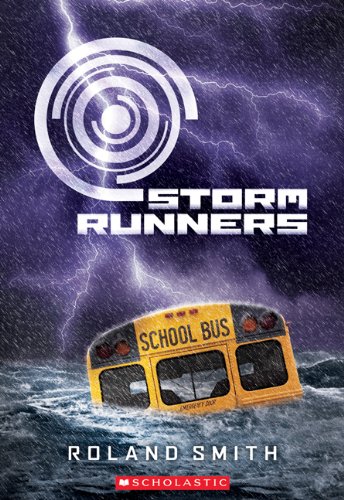 Book one in Roland Smith's middle-grade action-adventure series--now in paperback!Chase Masters and his father are "storm runners," racing across the country in pursuit of hurricanes, tornadoes, and floods. Anywhere bad weather strikes, they are not far behind. Chase is learning more on the road than he ever would just sitting in a classroom. But when the hurricane of the century hits, he will be tested in ways he never could have imagined. 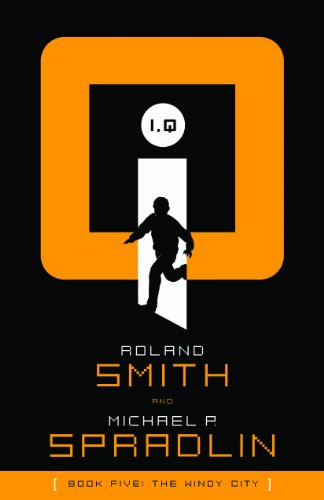 I, Q The Windy City

I, Q The Windy City

After Q and Angela help foil a Ghost Cell plot in San Antonio, they head to Chicago, the next stop on the Match tour. Since they've been busy fighting international terrorism, they're behind on their school assignments. Their parents tell them if they don't get caught up, it's off to boarding school. But who can concentrate on homework when there is a mystery to solve and international terrorism to thwart? Angela is obsessed with finding out more about the mysterious Boone. Q is more interested in not going to boarding school. But when Boone and his SOS crew are ambushed on their way to Chicago, it becomes abundantly clear. Someone inside their inner circle is feeding the Ghost Cell information. As they dig ever deeper to learn the identity of the mole, Angela and Q uncover the Ghost Cell's next plot. And it's much, much worse than a car bomb. They plan to unleash a chemical weapon over the skies of Chicago. And it's up to Angela and Q, along with Boone and Croc, to stop them. 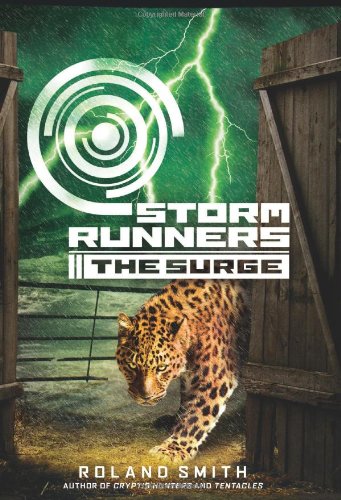 Master of middle-grade adventure Roland Smith returns with a second installment in this fast-paced action series.Chase and his friends Nicole and Rashawn have just survived Hurricane Emily, the storm of the century, but their troubles are just beginning. Although they've made it to the safety of Nicole's family's farm--the winter home of the Rossi Brothers' Circus--the floodwaters are rising and they need to reach higher ground. The circus's lions have escaped their cages, and a dangerous and unpredictable leopard is also on the loose. Have Chase and his friends lived through a terrifying night only to face a new disaster? 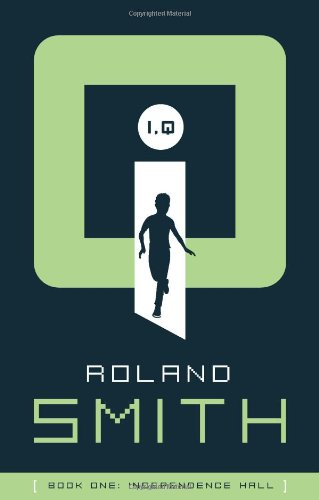 Thirteen-year-old Quest (Q) isn't sure he's ready for a new family. For a long time it's just been him and his mom, Blaze. But everything changes when Blaze falls in love with Roger and they start a new rock band called Match. Now they're married, have a hit record, and Match is going out on a year-long driving tour across the country. Q, along with new stepsister Angela, will take a year off from school and travel with the band. For now, home will be a luxury motor coach and homework will be a Web site diary of their travels. Perfect-Q can practice his magic tricks and Angela can read her spy novels. What can go wrong? As Q and Angela settle into their new life and new relationship as siblings, they start to notice that certain coincidences don't seem coincidental. For example, how does a band roadie named Boone find them in the middle of a desert where their coach just happens to break down? Why does a man from their parents' wedding keep showing up in the same cities they stop at? When they reach Philadelphia, Q and Angela realize this tour is definitely not the trip their parents had planned and that the "City of Brotherly Love" is full of mysteries and secrets that could threaten their new life together. In addition to his action adventure books, Roland is the author of many... 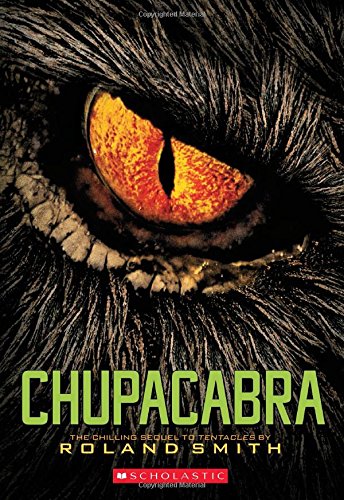 Monsters of legend come to life! The third thrilling title in Roland Smith's popular Cryptid Hunters series.A mythic creature, a captive girl, and trouble at every turn!Marty O'Hara and his best friend, Luther Smyth, have set off on their most urgent quest yet: an undercover search not for another mythical cryptid, but for Grace Wolfe -- Marty's cousin, Luther's friend, and the daughter of famed zoologist Travis Wolfe. Hoping to find out more about her mother, Grace has formed a shaky alliance with her grandfather, the notorious Noah Blackwood. Now she's living with him at his Seattle Ark . . . where she feels just as captive as all the other animals in his zoo.But strange experiments are taking place in the levels of laboratories beneath the Blackwood's Ark. Because if Noah Blackwood can't trap a cryptid, then he and his team of mad scientists just might have to create one. With Blackwood's henchman Butch McCall hot on the kids' heels and trouble at every turn, are Marty, Luther, and Grace on a collision course with a blood-sucking chupacabra?

http://www.wdde.org/39543-roland-smith-real-men-read Author Roland Smith talks about how his books are perfect for instilling a love of reading. Brick Mill Elementary School Librarian Janice Haney also lends her expertise on the impact that meeting an author can have on a young mind. See more: ...

This is a book trailer of a book called Peak, a novel written by Roland Smith. It is about a boy who goes to climb Mt. Everest with his father and team mates.

Beneath By Roland Smith