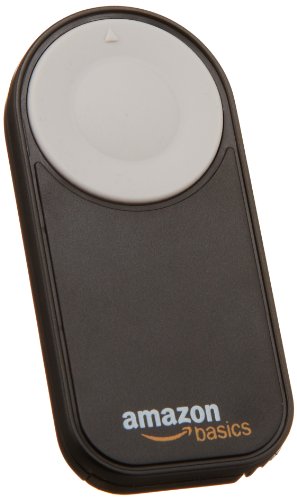 This slim, wireless remote for Canon T4i, T3i, T2i, T1i, XT, Xti, 5D Mark II, 7D and 70D digital SLR cameras instantly triggers the shutter without disturbing the camera. It's ideal for subjects that are difficult to approach, self-portraits or any shots where minimising camera vibration is a concern. Its 10-foot (3.05 m) wireless range makes it convenient for close-range to mid-range shots, group shots or any type of picture where timing is an issue. A battery for the remote as well as a velvet carrying pouch are included for your convenience. Wireless remote for Canon Digital SLR cameras at a glance 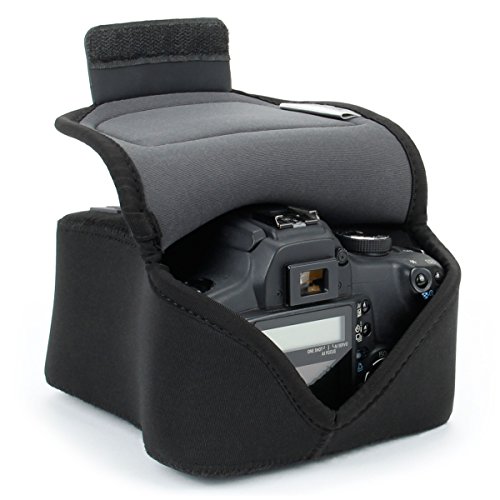 USA Gear FlexARMOR DuraNeoprene Camera Case Sleeve. Premium Construction. Everyday Use. - Whether you're walking the mean streets of the city or working on a photo shoot , this DuraNeoprene FlexARMOR DSLR Case is the ultimate companion. Boasting a lightweight design , this case conforms to your DLSR camera to provide ample protection without getting in your way. Rest assured that your DSLR is safe from scratches , dust , lens , LCD , and other low-impact bumps. Convenience Amplified - A durable hook and loop design allows you to open and close the case with ease , meaning you'll never miss that perfect shot. Utilize the zippered accessory pocket on the outside of the case to hold smaller accessories such as batteries , memory cards or flash drives. A hook and loop belt loop allows you to strap the case to your hip while shooting. Never worry about losing your case again! **Do not attach the case to your belt with the camera enclosed. It is not meant to hold the weight of the camera**. DSLR Protection - This case works as a permanent home for your DSLR! Use the straps of your favorite DSLR camera and wear the protective case around your neck. Even when not in use , this FlexARMOR case with prolong the shelf life of your favorite camera by blocking dust and spider webs. Interior Di... 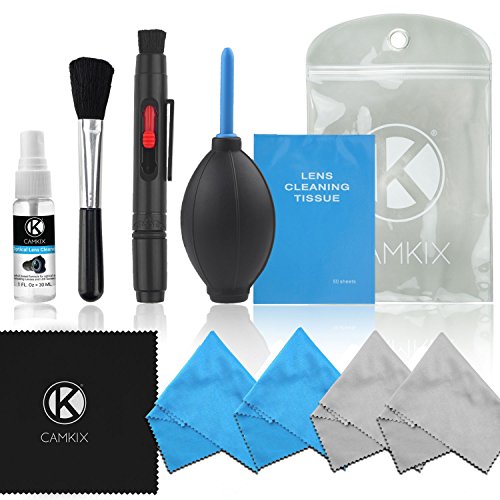 Keep your DSLR Clean and Prolong the Life of Your Equipment Every Photographer Knows the Importance of Keeping Your Camera in Pristine Condition Our cleaning kit provides all the tools you need to maintain your precious camera equipment. All the tools included are useful and compact to allow you to easily carry them in your camera bag.Contents:1x Double sided Lens Cleaning Pen: One Side is dust removal brush and other side is a special non-liquid cleaning element, designed to never dry out.1x Empty Reusable Fluid Spray Bottle: Fill with water or your favorite cleaning solution.1x Air Blower: Direct a powerful stream of air to blow away dirt.1x Lens Brush: Perfect for cleaning all optical items.4 x Microfiber Cleaning Cloths(Color random): For convenient in-the-field cleaning. Compatible with: Most DSLR cameras. CamKix If for any reason you are unhappy with any product by CamKix, please do not hesitate to contact us. We take full ownership and responsibility for the quality of our products and will do our very best to solve your problem quickly and efficiently! CamKix -USPTO# 86127507- is a registered trademark protected by US Trademark Law. CamKix products are sold by authorized sellers only. 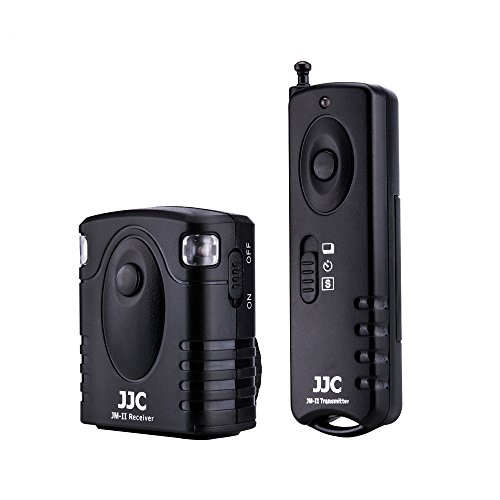 JJC JM-II Radio Frequency Wireless Shutter is designed for cameras that has a remote shutter socket. The system works at a 433MHZ frequency and has 16 available channels. In addition, this wireless remote system adopts a technology to allow the transmitter trigger the receiver without direct line of sight up to 30 meters. The JM-II receiver simply connected to the camera's remote socket by the supplied JJC receiver cable. JM-II transmitter can trigger the camera shutter at five modes: single shot, 5 seconds delay shot, 3 continuous shots, unlimited continuous shots and bulb shot. The receiver has a 1/4"-20 tripod mount socket on the bottom, so you can even mount the receiver onto a tripod. Most important, our JM-II transmitter is able to fire multiple receivers at the same time. The receiver itself with the connecting cable can be used as a Wired Remote Switch, then half press to focus, full press to take a photo. JJC JM-C(II)works with cameras as below: Compatible with Canon EOS cameras: EOS Rebel T6,Rebel T5,Rebel T3,Rebel XS,Rebel T7i,Rebel T6s,Rebel T6i,Rebel T5i,Rebel T4i,Rebel T3i,Rebel T2i,Rebel T1i,Rebel XSi,Rebel XTi,Rebel SL1,Rebel SL2 EOS 80D,EOS 70D,EOS 77D,EOS 60D,EOS 60Da,EOS M6,etc. Compatible with Canon Powershot cameras: Powershot G16,Powershot G15,Powershot G12... 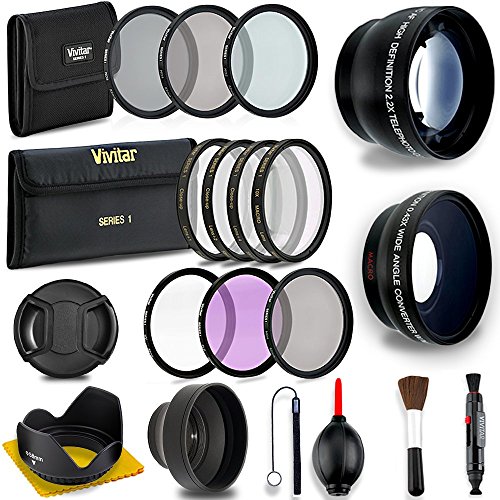 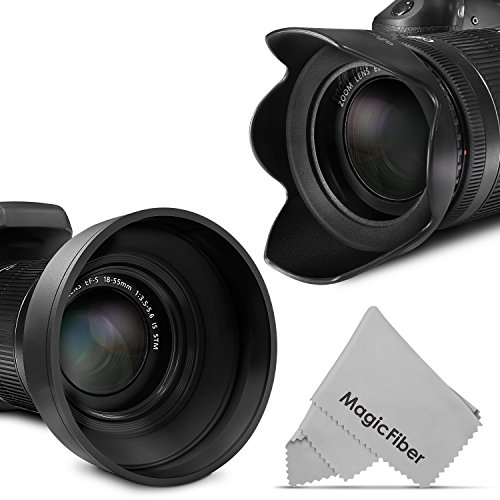 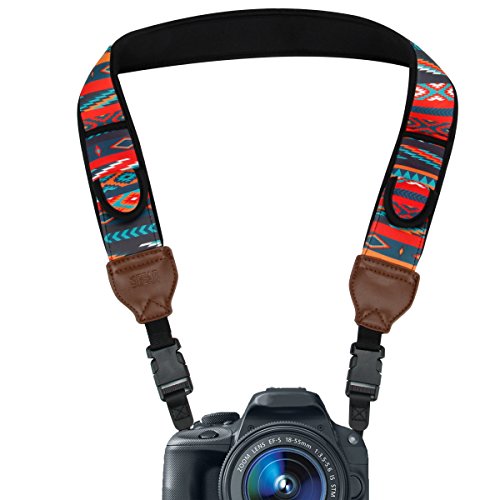 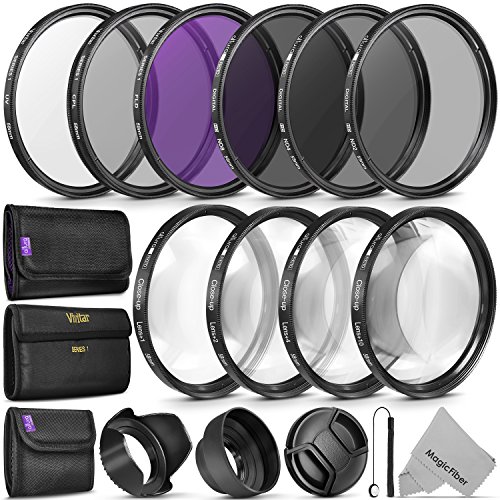 - 58mm Altura Photo 3pc. ND Filter Set (ND2 / ND4 / ND8)- ND filters (Neutral Density) reduce the amount of light reaching the film without affecting the color. Can be used to enable slower shutter speeds. Also can be used to better separate subjects from the background by allowing wider apertures, effectively decreasing depth of field.- These filters are double threaded allowing additional filters or accessories to be mounted one over the other. - 58mm Altura Photo Close-Up Filter Kit (+1,+2,+4,+10) - Kit includes 4 close up filters of increasing magnification. - These filters are double threaded allowing additional filters, lenses, or attachments to be mounted on top. - Vivitar 58mm 3 Piece Filter Kit (UV-CPL-FLD).- UV filters protects your lens from scratches, removes fingerprints and absorbs ultra violet rays, giving sharper contrast to your video and digital images.- CPL filters removes unwanted reflections from non-metallic surfaces such as water or glass Increases color and contrast by redcing reflections from non-metallic surfaces by cutting through haze.- FLD filters allows camera use under fluorescent lighting. Gives natural light colors when under poor conditions. - 58mm Rubber Lens Hood- Extend to full length for use with a telephoto lens - Collapse midway for wide a... 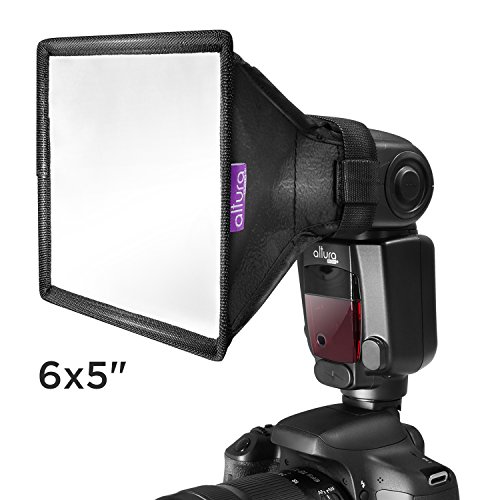 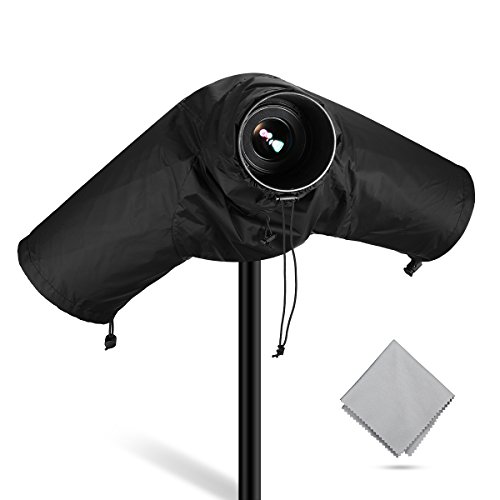 Photographer and educator Matt Kloskowski takes a look at some lens accessories gives some helpful tips about how to care for your lenses. In this final video on the Canon EF 101 series, you'll discover lens hoods, filters, extenders and more. For more information, please visit: http://Canon.us/e...

Top 5 Camera Gadgets You Should Have