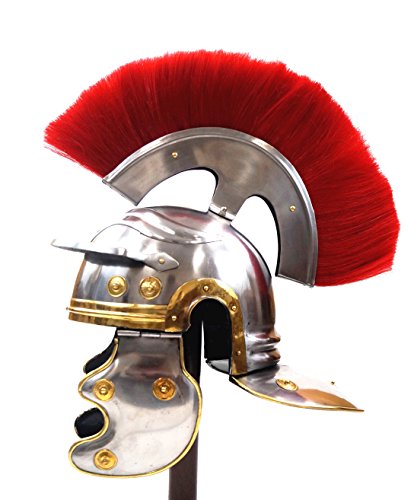 This is a Replica of a Roman Officer'S Helmet. The Helmet is Polished Carbon Steel. The Crest is Steel MountedBlack CordA Steel Arm. The Plum is Horse Hair Dyed RedCan Be Quickly Detached. 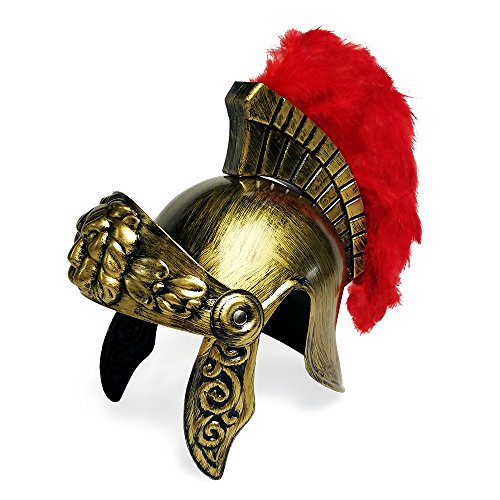 There comes a time in your present-day life when answering the call of days gone by must be heeded! Lo and behold your Roman Legion Style Gold Gladiator Helmet is here for just such a tribute to the era of Caesar Centurions and Colosseums. With an attachable/detachable feather plume and adjustable visor side guards you'll be prepared for the best of battle reenactments as well as neighborhood candy retrieval who says kids have all the fun? Sturdy enough for that authentic look without the weight of the real thing actual battle involvement highly discouraged. From the smallest adult head to those boasting a somewhat larger cranium our Roman Soldier Helmet fits most adults. Your purchase is backed by our 100 Satisfaction Guarantee in the event that your skull is of exemplary size or you find that this particular helmet just wasn't what was needed for that epic finale with Commodus . Onward ho fellow soldier your helmet awaits! . . Note: Although boys girls with more adult-sized noggins may find this helmet suitable it is more apt to fit the head of most men and women warriors of Rome looking to take on the occasional Greek god or goddess not to mention the boastful emperor & band of knights or wayward crusader (whether teen or senior citizen)! Whether adding to already existing cos... 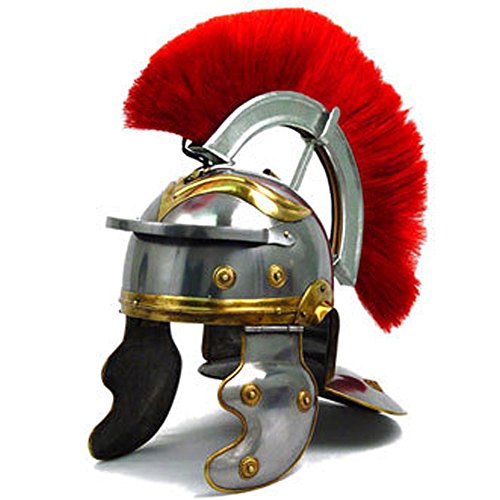 The centurion was the commander of a centuria, which was the smallest unit of a Roman legion. The centurion commanded about 100 men, and there were 60 centurions in a legion. The Roman Centurion was often of the humblest origin; he had been promoted from the ranks simply on account of bravery and military efficiency. Thick, hand-forged carbon steel is used for the durable construction of this Roman Imperial Centurion Helmet. Horse hair is used for the 5.5 inch tall plum and dyed red so it made as to give an imposing look with the illusion of height that helped him to appear more commanding. Carbon steel is contoured to the authentic shape of the historical helmet. Layered steel adorns the top. A moveable steel visor is fixed to the front. Around the sides are brass decoration rivets to signify status. A transverse crest is featured on the front meaning that it ran from side to side across his helmet. It is believed that the centurion wore this type of crest in battle during the early Empire to serve as a visual reference and rallying point for their men. The bottom edge of the Roman Imperial Centurion Helmet is trimmed with brass all the way around. At the back is a carbon steel neck shield designed to fit over a gorget. Each side of the face is further protected with a hinged sh... 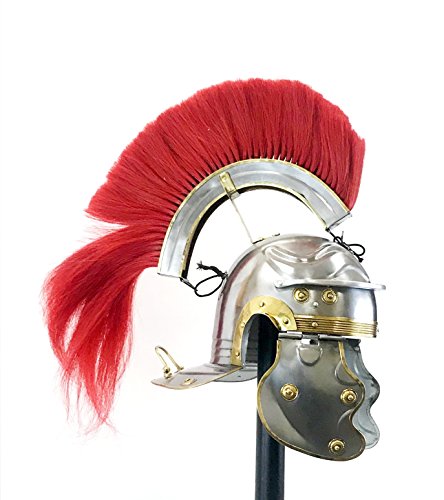 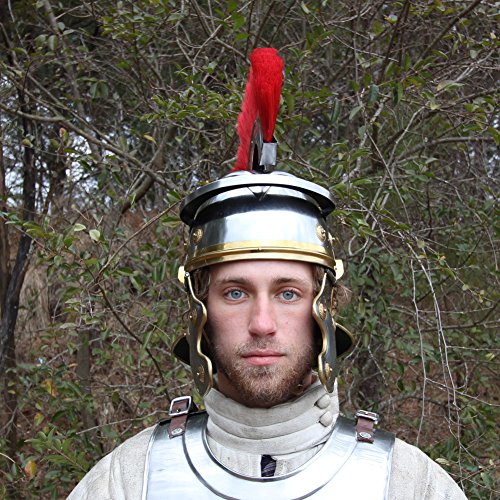 Thick, 18 gauge carbon steel is used for the durable construction of this Roman Imperial Centurion Helmet. Horse hair is used for the 7 inch tall plum, died red. Carbon steel is contoured to the authentic shape of the historical helmet. Layered steel adorns the top. A moveable steel visor is fixed to the front. Around the sides are brass decoration rivets to signify status. The bottom edge of the Roman Imperial Centurion Helmet is trimmed with brass all the way around. At the back is a carbon steel neck shield designed to fit over a gorget. Each side of the face is further protected with a hinged shielding. Inside the helmet you will appreciate the soft leather suspension liner for it's natural comfort. Leather chin straps are adjustable. Fits adults. 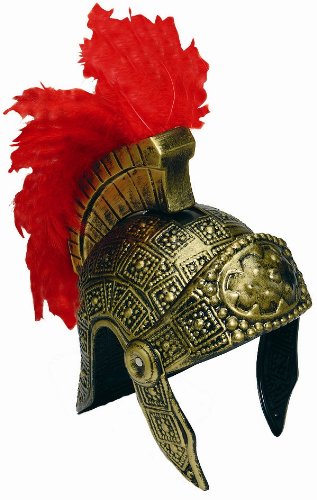 This style of Roman Soldier Helmet was worn by Centurions and other higher ranking officers in the Roman Legions, including generals! Wear this with any Roman soldier costume to create an officer or even with a Marc Antony or Caesar costume for a battle ready look! 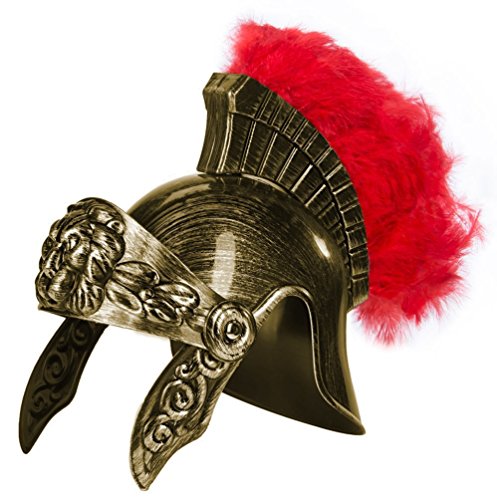 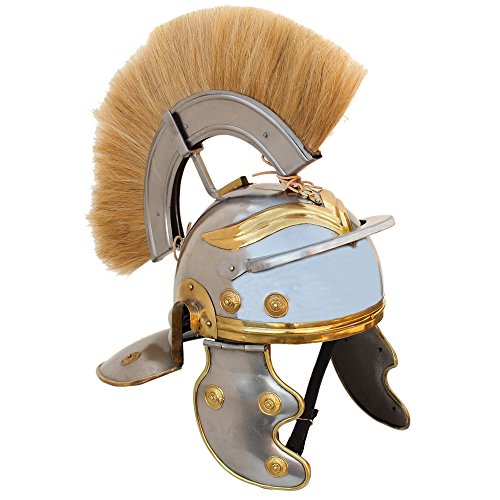 The main officers of the Imperial Roman guard were the Centurions, each in charge of 100 men, hence the name century. This Imperial Roman Centurion Helmet with Blonde Plume is perfect for use in plays, reenactments, and more! Centurion Generals wore adorned plumed helms that could be easily seen in battle. This full size historical hand crafted helm is in every way as glorious as the originals with its full crest and brass accents. This Imperial Gaelic-Type helmet was the choice of officers who led the mighty Roman armies. The flamboyant crest actually served a purpose for the conspicuously practical Romans. It made the officer more visible to his men while offering the illusion of height that helped him appear more commanding. At different time periods of its use, the color of the plume signified different things. During some periods the color specified the officers? rank, and at other times it designated units. The colors could be red, white, black, brown, reddish brown and others, as well as two or more colors mixed. At times the plume would run from front to back, and at other times it would be mounted cross-ways. Our Helmet is fully wearable with a soft Genuine Leather liner and chin strap, it also features the popular brass ?eyebrows? and accents. 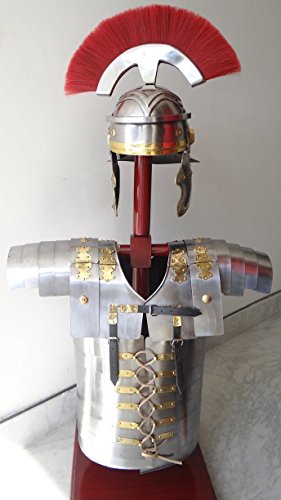 Helmet Medieval Roman Armory Collectible Larp Costume Roman Lorica segmentata Reenactment Armor Breastplate High Quality Museum Hand made replica at Lowest Price, Medieval, Collectables, Antique, Halloween Dress Muscle Fancy Fancy Lorica Segmentata Good Quality 18" Gauge Iron Steel and Brass Chest size 44" Lorica is adjustable up to 52" 18 Guage Iron Steel & 20 Guage Brass + With Full Size Wearable Roman Officer Centurion Helmet with Red Plum All these are hand made and are coated with oil/greese/laquered. The Medieval lorica segmentata Re-enactment contains of broad MS iron or MS steel strips ('girth hoops') which all fastened to internal leather straps. All the strips are arranged horizontally on the body, overlapping downwards, and they surrounded the torso in two halves, being fastened at the front and back. The shoulders and the upper body protected by additional strips ('shoulder guards') and breast and back plates. Please note :We supply this item pre-oiled to prevent it from rust. 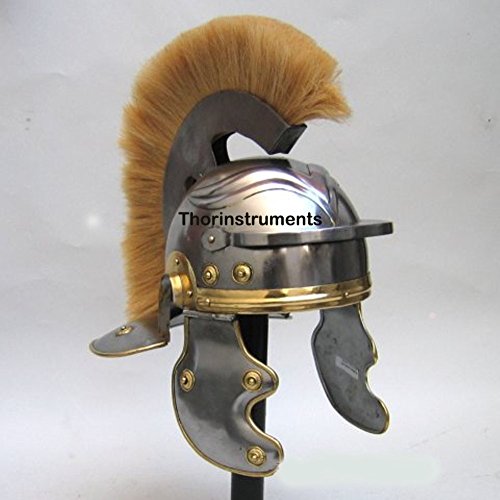 1) It is made of 18 gauge mild steel. 2) It come with inner Liner. 3) Well polished finish. 4 ) Fully Wearable Fancy Costume Helmet.

A guide to help you get a good Roman helmet with a reasonable price. Originally, Roman helmets were influenced by the neighboring Etruscans, people who utilised the "Nasua" type helmets. The Greeks in the south also influenced Roman design in the early history of Rome. H. Russell Robinson in ...